A Brief History of Process Service 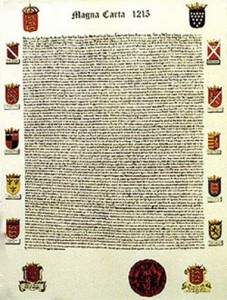 Most people know very little about process serving and why it’s important, but its history goes all the way back to the year 1215.  That year, the term due process was first used in one of the most famous documents of all time: the Magna Carta. Over the last 800 years, due process has evolved to include what today are known as process servers.

To see this evolution, check out this timeline:

1215 English barons extracted the principle of due process of law from King John. Clause 39 of the Magna Carta guaranteed that no free man may be taken or imprisoned, or ousted of his lands, or outlawed, or banished, or hurt in any way; nor will we [the king] go against him, nor send our officers against him, save by lawful judgment of his peers or by the law of the land.  And just like that, due process was born.

1787 For more than 500 years, there was little change to due process, but on September 17, 1787, the Constitution of the United States of America was completed to be the basis as the law of the land.  In this perhaps most famous document ever written, the Founding Fathers included the following language: No State shall make or enforce any law which shall abridge the privileges or immunities of citizens of the United States; nor shall any State deprive any person of life, liberty, or property, without due process of law; nor deny to any person within its jurisdiction the equal protection of the laws.

1982 A group of process servers from 11 states met in Las Vegas to form an association for the principal purpose of combating proposed federal legislation that would allow service of a summons and complaint by certified mail. That group, under the leadership of two members of the California Association of Legal Support Professionals, approved the formation of the National Association of Professional Process Servers (NAPPS). All legitimate commercial process servers should be affiliated with this group.

While the ideals behind due process have changed very little over the last 800 years, the integrity of those doing the serving has.  Hundreds of illegitimate process servers join the ranks every year, many of whom have given the industry a bad name.

Before choosing a process service company, do your homework. Make sure they are a member of NAPPS, that they are licensed and bonded and that they stand behind their work.

https://youtu.be/pCSjMMli0Ow JPL Process Service and all state and federal courts will be closed this Monday,

JPL Process Service and all state and federal courts will be closed this Monday, January

In observance of theÂ ThanksgivingÂ Holiday, JPL Process Service and allÂ California CourtsÂ will be closed on Thursday, November